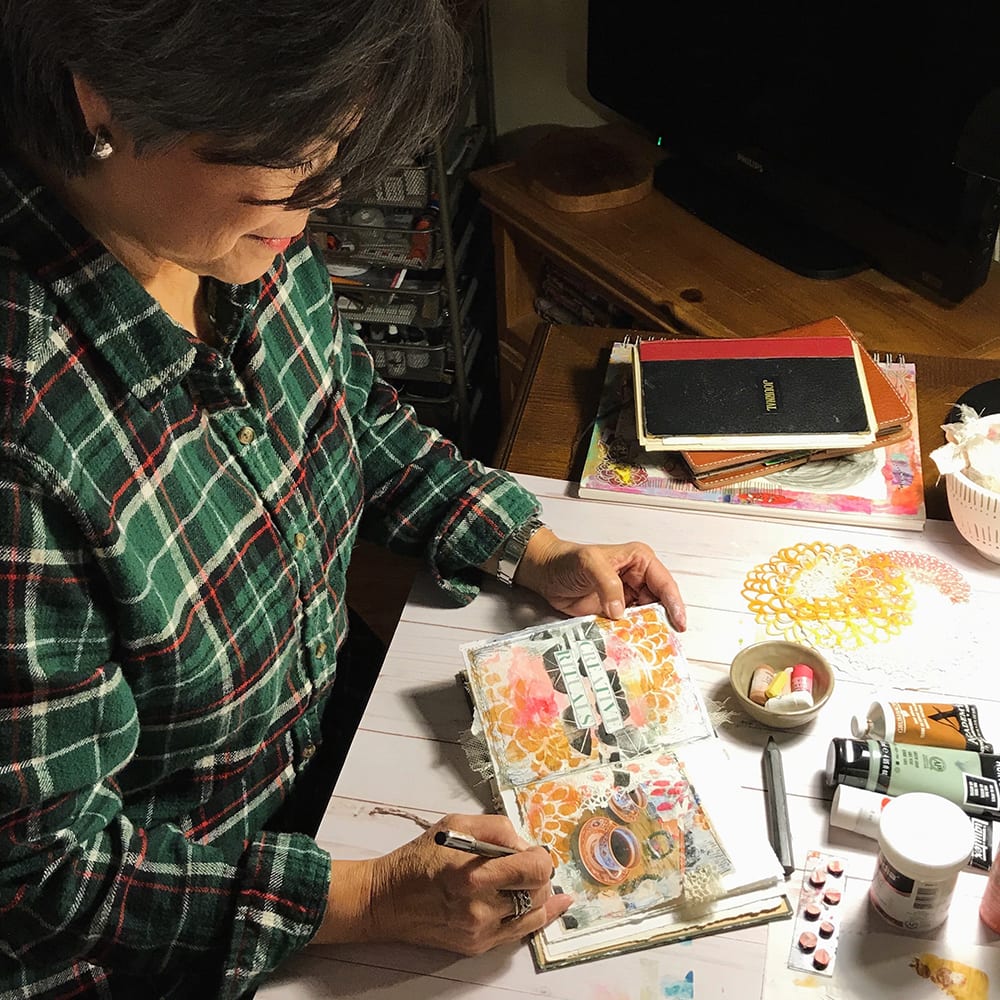 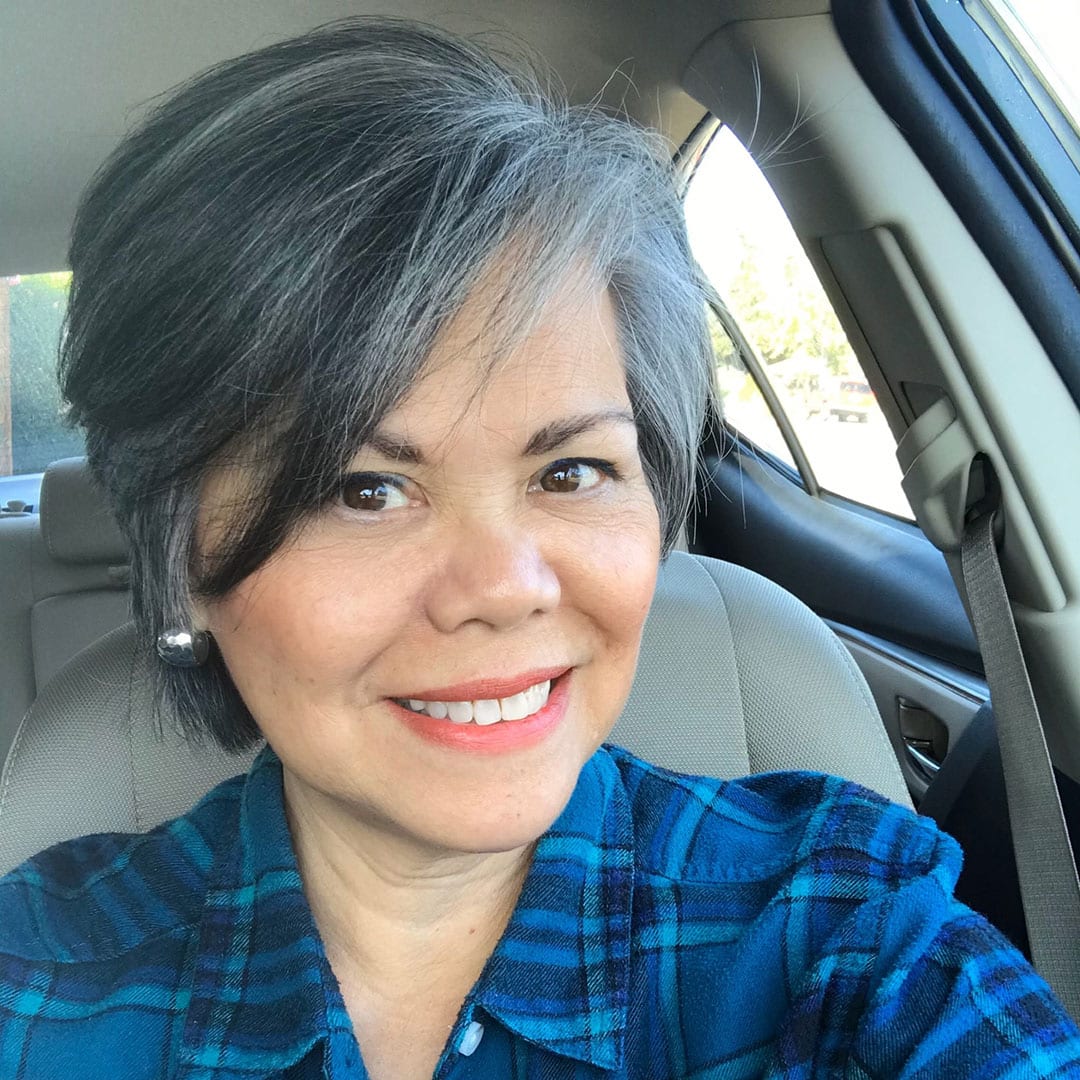 Char is an artist, designer and maker whose work is abstract, intuitive and organic in style, with a no-rules approach. She is influenced by experiences and emotions; colors, patterns, and just about any kind of ephemera out there! Char loves using her creativity for personal expression and connection.

(this transcript is automatically generated and is sure to contain errors. It is provided here for your convenience)

Hi, I’m Char and welcome to Get Messy and the Season of Home, I’m kind of new to art journaling, so you’re probably wondering how I got here.

I have over 15 years of experience in mixed media from jewellery and caustics, fibre arts journal, making, collage, all of that stuff. But in 2012 I decided I wanted to paint and paint big on canvas and other substrates. So embarking on that journey, I started with going to retreats and taking online workshops and I was enjoying it, but I struggled. It wasn’t easy. I had a couple of teachers tell me that I was too much in my head and that was not a good thing. And then I encountered other teachers who were more understanding and encouraging and those were the voices I decided to listen to.

It allowed me to be kinder to myself and just try to learn on my terms. I like to, when I’m creating, I’d like to be alone. It’s not that I don’t like the energy of others or being social or anything like that. No, it’s just that I just work better by myself. So this went on for a couple of years and you know, years of highs and lows and struggles and all that stuff. But it wasn’t until I had a major breakthrough in my thinking and I had this aha moment, which was I didn’t need anyone to validate my work.

The only validation I needed was my own.

That shift just helped me get out of my head and it opened my heart. And once I accepted this, again, a radical shift in my art, a shift in my process and also in my attitude.

So fast forward. And the next thing I knew, I had two painting exhibitions under my belt. The first was a solo exhibition, which was at the mountain view center for the performing arts, which is very special to me. I grew up in mountain view, California and I’m there practically every day. So that was, that was like going home. The second was a mixed media exhibition in San Jose, California. And that was a lot of fun because I got to meet local artists and the collaboration was there and it was just connecting and it was a real wonderful experience. But in 2015, our daughter was getting married, so I put away my paints and I kept busy with other projects, but nothing massive like painting because I would, I don’t have a dedicated studio. I am in the process of converting a spare bedroom now into a studio space.

But face it, I’m not going to get to that until the summer. But back back then I was painting in the living room and I was painting in the dining room. Um, and my family is very understanding about that. So I’m, I’m proof that you can, you can do your art form anywhere. Um, so anyway, moving on, I, after, after the wedding, I still, I still kept creative with projects and whatnot, but it wasn’t painting. I did for some reason. I just, I wasn’t feeling it.

So when that happens, I think it’s best just to honor what you’re feeling, what you’re going through and it’s okay.

So at that time also, I knew that I wanted to make I, I was in maker mode, in building mode. And so part of that was returning to costume design and I love the creativity involved in that. So I continued making journals for myself and to sell.

And I, I was enjoying that process, but I wasn’t working in my art journals. So there was the disconnect. I still followed other artists and I would see what they would create in their journals, thinking, gosh, I’d really like to do that. But it, it just, it was like, it didn’t make sense to me. If I’m going to paint, I’m going to paint on a canvas. I’m not going to, I’m not going to do that stuff in an art journal. But one day I decided I’m going to try this. So that led to another aha moment where I finally realized that what was missing in my thought process. Remember, I’m real heady and I think a lot was finding purpose in our creating. And once I thought about that and realized that purpose is very important to creatives, whether you’re aware of that or not.

Um, again, I was able to jump into it and for me, I realized it was a way to tell a story when I didn’t think I had one to tell.

It was a way to share my feelings without being judged.

Because face it, you don’t have to share everything you make on Instagram or your website or whatever. If you’re enjoying something because you love doing it, that’s enough. And that’s, that’s great. So that is when I really got into art journaling and developing my own style.

Because when you’re authentic and purposeful and honest, it translates into your work and that’s what makes what you do uniquely yours.

Because I want to tell you something, it’s all been done. There’s nothing new out there. You might, um, let’s say by accident, uh, find a technique that you really love and you think, Oh wow, this is so cool. Oh, I made something up. And then the next thing you know, somebody else is doing it. It’s because it’s been done before. Maybe you picked it up through osmosis or something, but it makes me laugh because, okay, I’m going to tell you another story.

So I was watching someone on YouTube who, did a technique, I’m not gonna get into specifics, but this person was so excited about this technique as if she invented it. And as I was watching it, I thought we were doing that back in 1999. That’s nothing new. So I don’t mean to be crass about it, it’s just, it, it keeps you, in my opinion, when you know that it’s, it’s a technique that’s been done before then I think it just allows you to make it your own and that’s what you want. Right?

I didn’t know I had a style. It took me a long time to accept that it’s still difficult for me to call myself an artist for some reason, so I’m just keeping it real. It’s a journey. And again,

once you are able to, to connect to what it is that you’re, that you’re making, that’s, that’s when you know, you hit it.

I’ll see you next time.

share your pages in the Gallery and your thoughts in the Forum. Connect with and be kind to others.