Hello everybody! This is TC, and I’m so glad to be back with you for another tutorial, this one using alcohol inks on a different substrate, something called Duralar. I’m not an alcohol inks expert but I’ve used them enough to figure out some cool effects and tricks that make them really fun to work with. We’re going to create some organic layers, layers that express the beautiful components of wholehearted, fully realized people who are able to live in harmony with others and invest in their communities.

My Take On Ubuntu

When I began thinking about the theme of ubuntu, my mind went to a negative place. I started thinking about all the injustice in the world, all the obstacles to people being in community, being safe, living in peace, able to concentrate on being fully present and living fulfilled lives. Systematic racism, negative bias, sexism and gender discrimination, poverty, trauma, lack of access to health care and/or mental health services, unsafe neighborhoods, lack of livable wages, the list goes on and on. Depressing, but also the reality for so many people. I sat with this for a while and seriously considered making a page that stayed with the negative emotions that come when one examines the harshness of the world.

Then I started collecting thoughts of all the ways we counter these realities, the ways we can live wholeheartedly, connected to community and at home in ourselves. Of course Brene Brown’s work surfaced, along with human development theories such as Maslow’s hierarchy of needs. I drew from these as I considered universal traits that connect us across cultures and backgrounds and how we can be a positive force in our communities.

I would love to provide you with a list of all the characteristics the research demonstrates of a fully-realized person, but it would be too long. A quick definition of a person who is fully-realized or fully-actualized is “someone who is able to express and activate all their capabilities” (Carl Rogers).

In researching the idea, a few characteristics of this type of person really jumped out at me:

Brene Brown has a list of her own, which includes 10 attitudes or practices, which you can read about in Gifts of Imperfection. She talks about our innate need to belong, and engaging in our lives from a place of worthiness (Gift of Imperfection, loc 199). Here are a few of these:

To me, these characteristics are universal and something we are all striving for, even if we don’t articulate them in so many words.

We want to connect with others.

We want to be seen and accepted.

We want to have the strength to fail and get up after that failure.

We want meaningful work. We want to know we make a difference.

Therefore, these amazing characteristics are the things I chose to focus on as I created this spread. 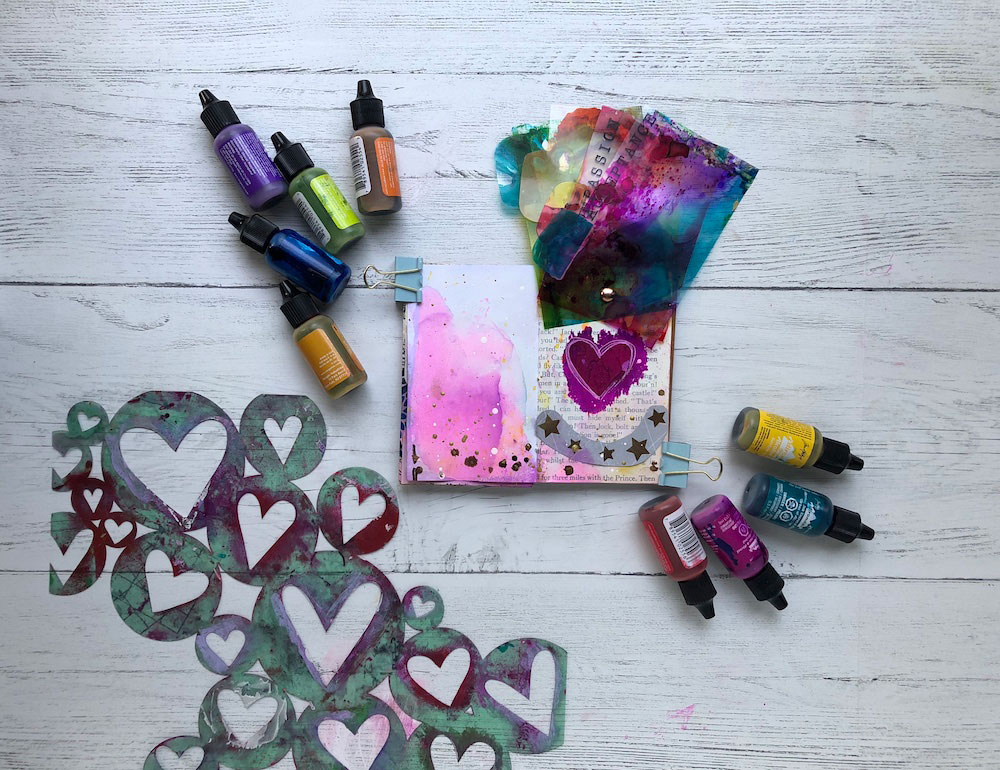 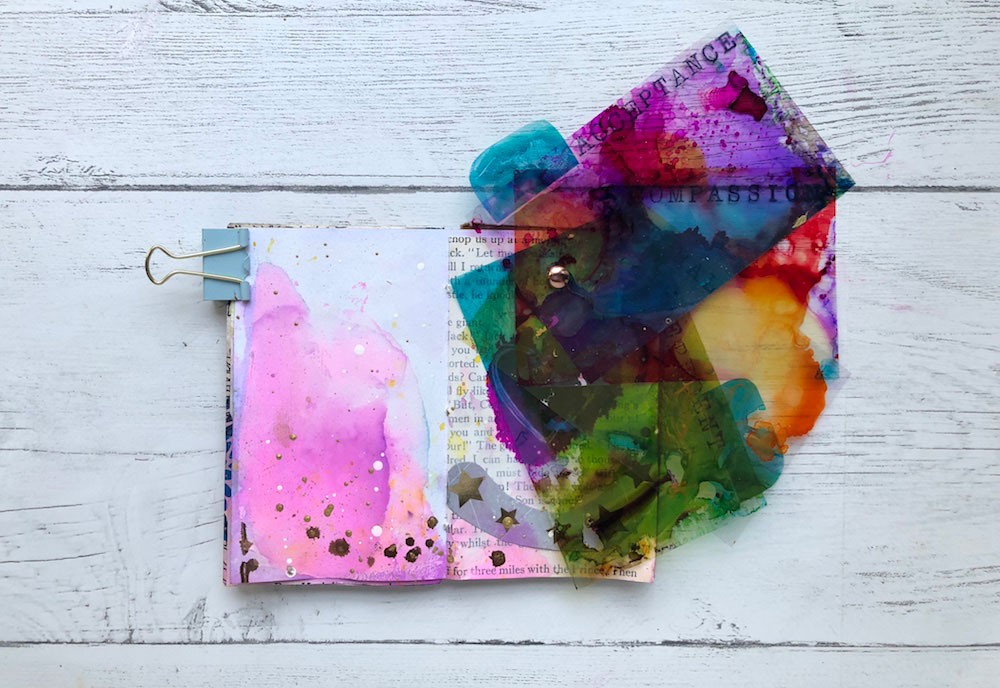 First I just wanted to introduce alcohol inks to anyone who might not be familiar. These come in little bottles and pack a powerful punch. They have a scrumptiously intense color and dry quickly. I’ve used them on canvas and on paper but today we’re going to use them on something called Duralar.

Duralar is available at many craft stores, but you might not have noticed it before. It’s a little like a thin version of a transparency from the days of overhead projectors, but with a few tweaks that make it work well as a material for art journaling. I’ve tried reproducing these effects on palette paper, but it doesn’t work quite like Duralar (but feel free to use something else if you’d like).

I chose to use alcohol inks as a challenge to myself and as a nod to the organic nature of community and the fluidity of our personal development.

One thing to note is that when alcohol inks get on your skin, they stay on your skin. Washing your hands will only take off a little bit, and then it just has to wear off over the next day or two. I totally forgot to use gloves in my videos, but you might want to grab a pair of some kind of plastic gloves so your fingers don’t turn bright pink or green!

Another thing is that you will probably want to seal your alcohol inks so they don’t transfer from the Duralar onto your hands or other materials. As a shortcut, I tried using some basic sealant I had on hand, but I lost the shininess of the Duralar. It’s worth it to invest the $9 on a can of the Krylon Kamar sealant. The hardware store does not carry it (I looked there first because it was convenient, but struck out) but most craft stores usually have it around.

With those things in mind, here we go!

Now that we’ve got a basic understanding of Duralar and alcohol inks, let’s create a page together.

Because I’m focused on universal characteristics of wholehearted living, I chose to use a heart as a focal point. I used a stencil and modeling paste to make a heart on the right side of my journal. While that was still drying, I dropped some alcohol ink on it. Then I outlined the heart with a white gel pen.

For the layers of wholehearted characteristics, I swirled alcohol inks on Duralar, then trimmed four of these down to my journal size. I then stamped one characteristics on each of these layers, and secured them on my page with a brad. I left these to dry overnight so I wouldn’t smudge them.

To unify my page I put some colors on a different piece of Duralar, then smooshed my journal onto those colors, using lots of alcohol to dilute the intensity. And what would I be if I didn’t include some splatters and shine as a final step?

Today we’ve focused on wholehearted lives, and we’ve identified universal characteristics that are both practices and traits we can cultivate. We’ve let alcohol inks work their dreamy exploratory magic and we’ve used them to highlight some characteristics of wholeheartedness that resonated with us, whether that’s things we appreciate already or things we’d like to see more of in our lives.

I hope you’ve been able to take away some new techniques or ideas today. I can’t wait to see what you create in response. I’d love it if you’d tag me on Instagram so I see your own take on this. And as always, thanks so much for allowing me to share with you and be a part of your day! 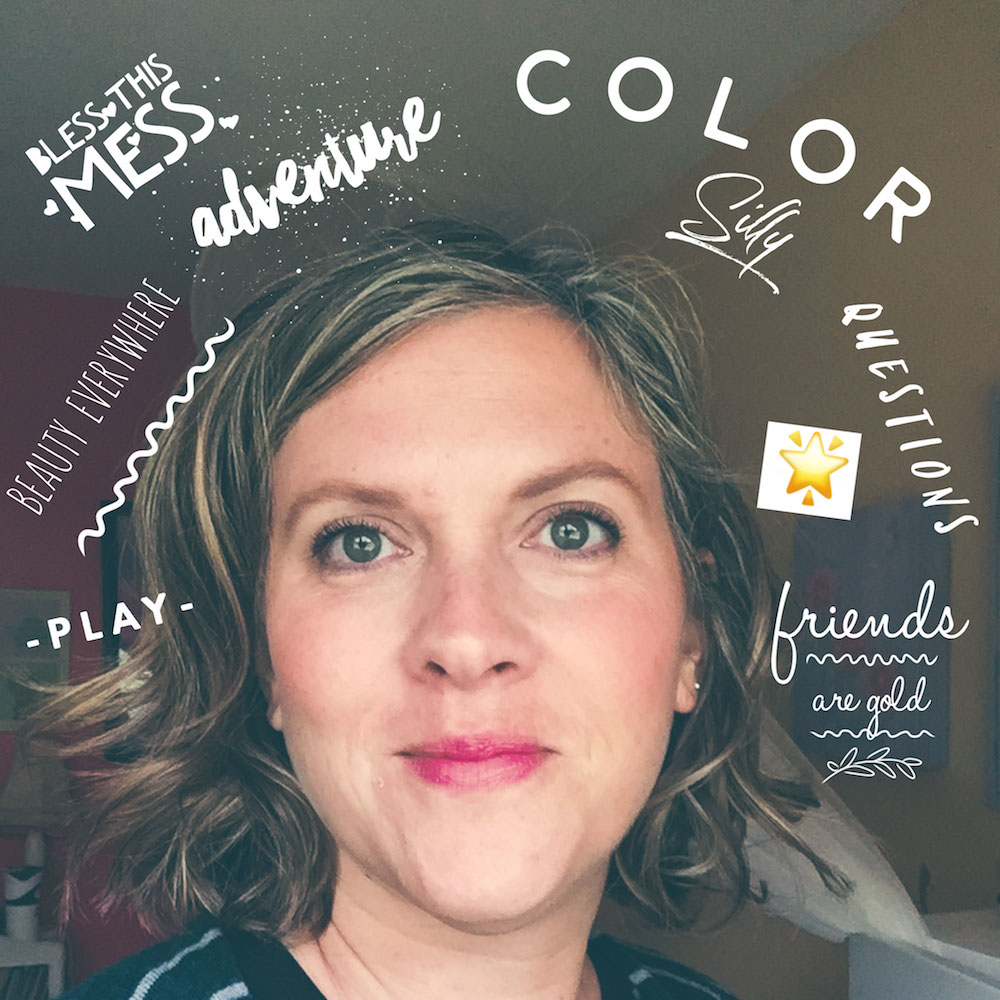 TC lives in St. Paul, Minnesota. Her favorite part of art journaling is following a feeling or idea and seeing where it leads on a page.