Documenting Your Emotions in a Lunar Calendar 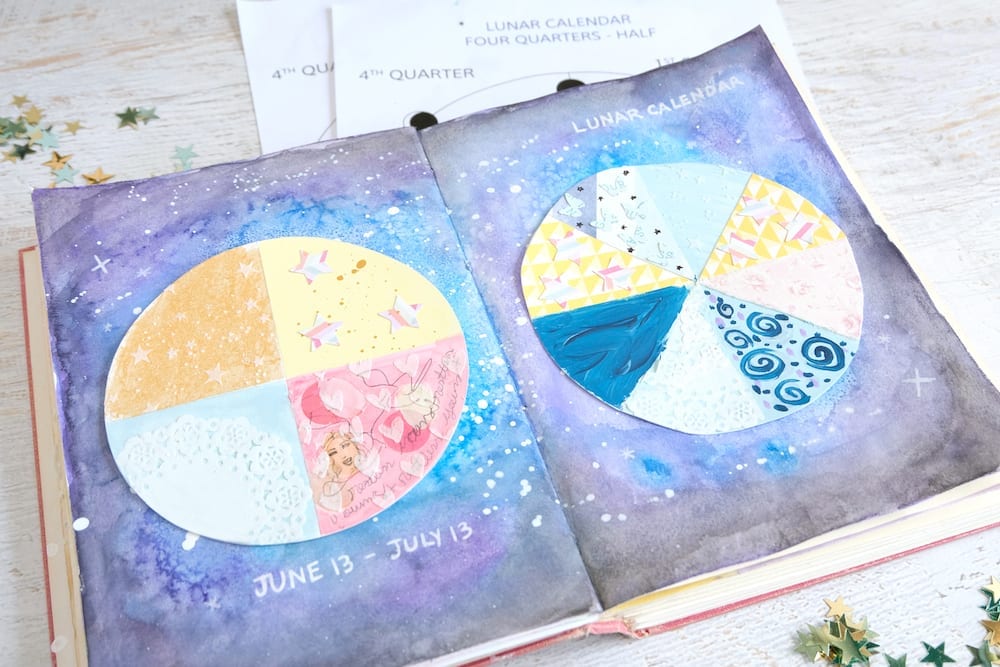 Tiffany here with a different sort of tutorial for the season. When I first heard the Season of Seasons, I thought about nature and the physical seasons–spring, summer, autumn, winter. I also thought about cycles, like the creation of the stars, the cycle of the sun and moon, etc. I knew for certain I wanted to explore some sort of natural cycle and how these cycles either affect us or how they correlate with our lives. I kept coming back to the phases of the moon and the lunar cycle. There are many people out there in the world that believe the moon has a wide effect on our lives. I personally think it’s rather curious how a woman’s menstrual cycle often lines up with moon cycle. Throughout history even, people believed that the moon affects us just as much as its gravitational pull affects the waves and tides of the ocean. Often wonder where the words “lunacy,” “looney,” or “moonstruck” came from? It was often believed that the full moon had a strange effect on one’s personality and emotions. It’s said that a full moon could drive a person mad!

There are also a few who believe in this so much that they often keep track of their emotions in a lunar calendar of sorts. So for this season, I encourage you all to partake in creating your own personal lunar calendar. In this calendar that we will create in our journals, I want you to track your emotions throughout the lunar cycle, so that at the end of the cycle you’ll end up with an illustrated wheel of your emotions. I will present you with two ways you can track your emotions through your art in little chunks so that at the end you’ll end up with a mosaic of your feelings to look back on. The more calendars you create, the more you can begin to compare how the moon cycle correlates with your feelings.

This is an ongoing art project and I’ve set up this lesson to make it as easy as possible for you to track your emotions in small chunks throughout the season. For the purpose of this tutorial, I’ll be showing you how I’ve made my calendars from tracking my emotions during a moon cycle that occurred in late June. 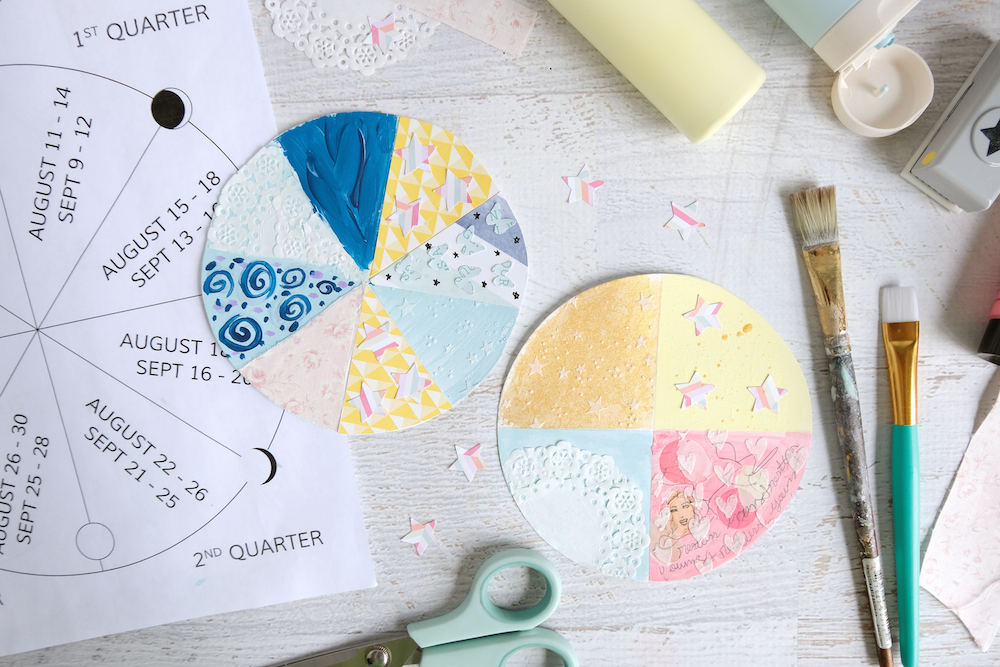 Before we begin, I’ve provided you all with a few printables to guide you in creating your calendars. In the PDF, you will find two lunar calendars and a reference key to the different phases of the moon. Both calendars are divided into the four quarters of the moon cycle, with the second calendar divided up even further into eighths to provide you with a more in depth lunar chart. As I will explain in the video, you can divide the calendar up even further–right down to each phase position of the moon if you’d like–to create a deeper lunar calendar to chart your emotions. I’ve noted the corresponding dates on each calendar, but if you do decided to divide your calendar even further, use this website to find the corresponding dates. You can download the PDF by clicking the image below. 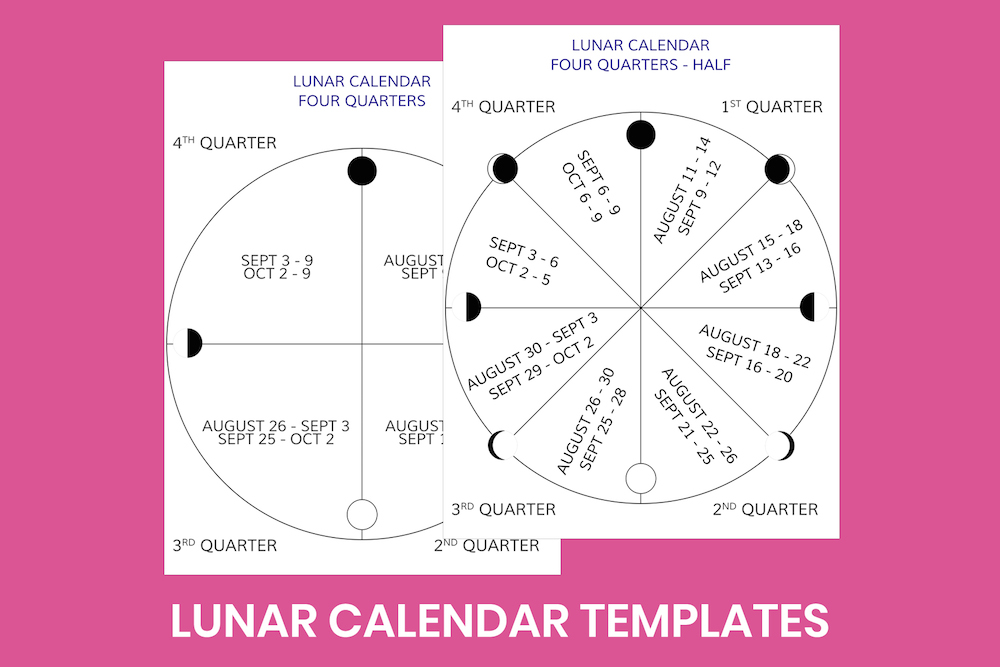 To begin, choose which calendar you’d like to fill in and recreate it either on a separate sheet of paper or directly in your journal. Since this is an ongoing project, I’ve chosen to make mine on separate sheets then add them into my journal later after they are complete. But work in whichever way works best for you. Make a note which section you need to work in by day that way when it’s time to starting documenting your emotions you know which section to work in when. In the following video, I’ll explain a bit more, providing you with visual examples of what the project is all about.

I hope my explanation of this project was clear and easy to understand, and that my visual examples helped. We’re basically painting by numbers, filling in whichever section of our lunar calendar we’re on with a visual representation of our emotions on the given day or timeframe for that particular moon phase. However, you can get as creative as you want on how you incorporate your calendars into your season journal! For instance, I created a watercolor galaxy background in my journal before I glued in my two lunar calendars. To paint the galaxy, I simply followed the Painting Galaxies tutorial. This was very different for me, but I felt that it was appropriate and it really made my two lunar calendars pop. 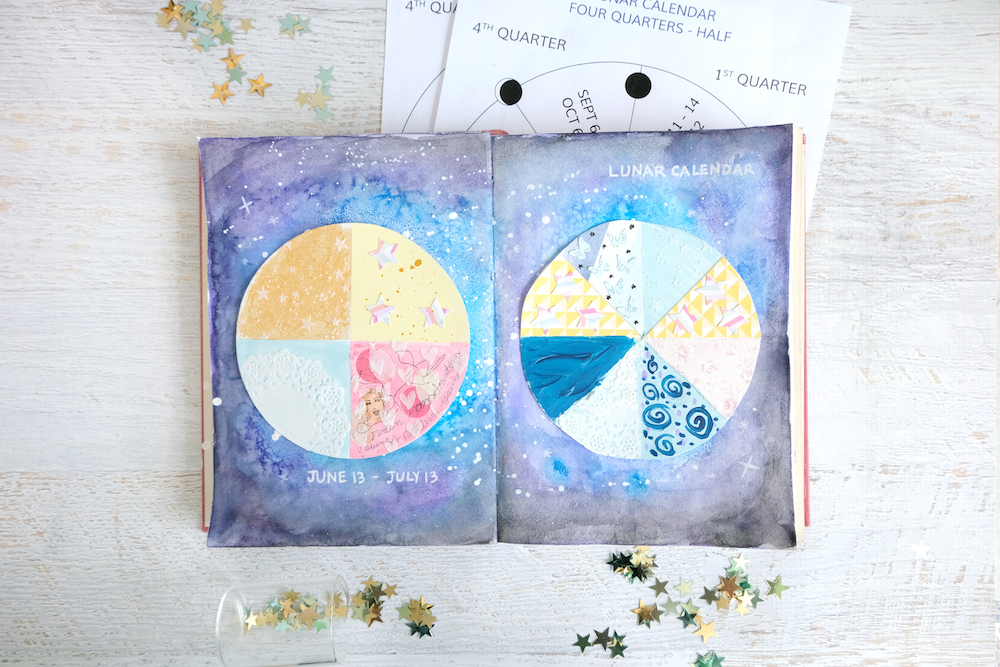 Create your own lunar calendar or calendars documenting your emotions for the season. You can keep as many different types of lunar calendars as you want. For instance, you can keep both the quarter and half quarter calendars to better compare your visual emotions at the end of the lunar cycle. Feel free to keep a more in depth calendar as well if you wish. The more calendars you have and the more cycles you document, the better idea you’ll get on how the moon cycle affects your emotions. 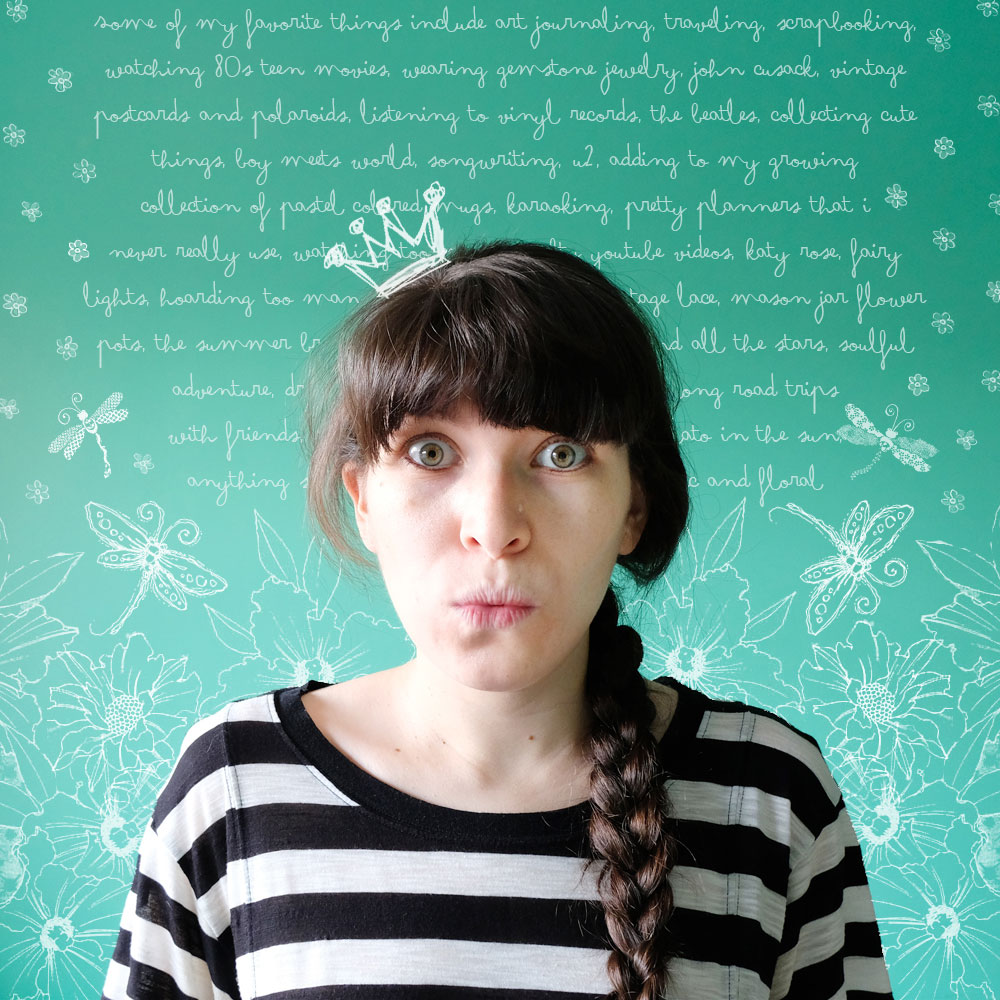 Tiffany is an artist of many trades living in New York City with an absolute passion for documenting her everyday life. A traveller to the core, she loves documenting her various journeys around the world in thick handmade travel journals bursting with photos, memories, and travel ephemera.