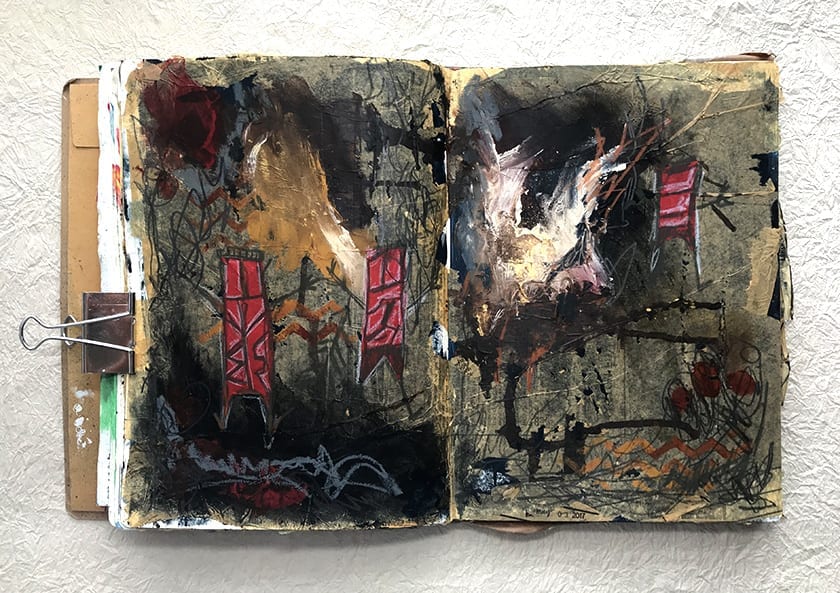 Hey, this is Misty! Last spring Get Messian Divyam Bernstein and I got started chatting on Instagram about earth tones. She and I realized we often overlooked using them because we’d presumed that brown was, well, a little boring. We challenged ourselves to spend a week working with an earth tone palette. 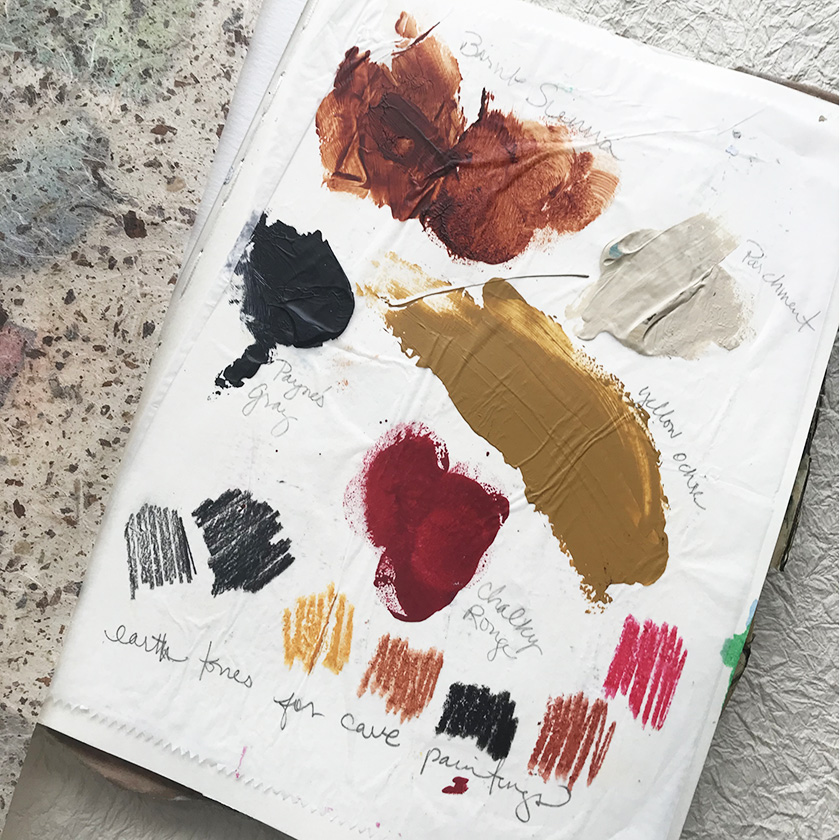 While we were exploring the palette in our art journals, I did some reading about the markings that prehistoric people groups have left behind in caves around the world. What I found was a unique glimpse into the past. I want to share some of the highlights with you and then have you explore cave drawings and earth tones in your journal.

Lines drawn in soft earth on cave walls are called Finger Fluting. The soft, squishy dirt is called moonmilk, which is a white, creamy substance found in damp limestone caves. These meandering lines are found in caves all over the world and are made by both men and women, children and adults. 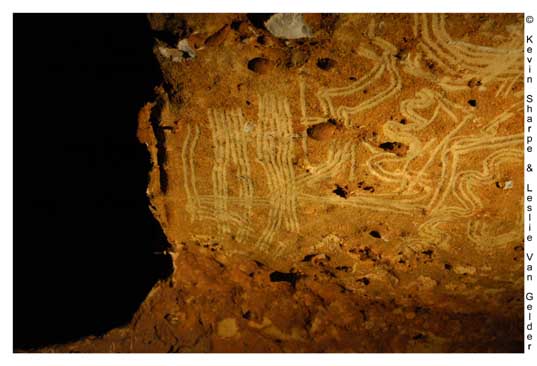 These finger flutings are in Rouffignac Cave (also known as Miremont cave) in France.

The meanings of these markings are debated with some people saying they are doodles, some saying they could be about hunting or water sources, but mostly there’s no good explanation of why these ancient people decided to leave their mark. I choose to think about how sand feels shifting over my feet when I’m standing at the edge of the ocean and wonder if these long ago artists just liked the feeling of the moonmilk sliding through their fingers. 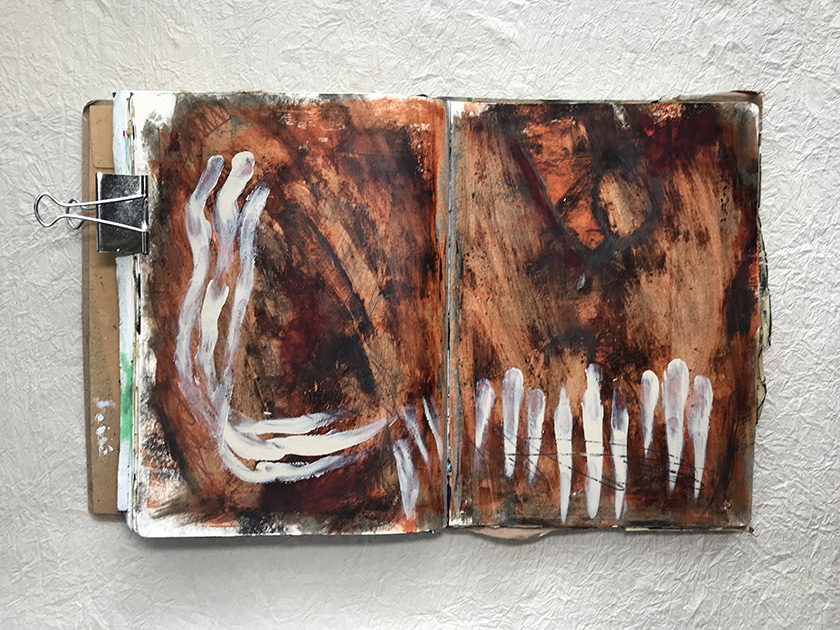 Hand Stencils were another popular way our ancestors left their marks. These hand outlines were made by blowing pigment onto a hand held up to the wall. I wonder if these early people had any concept of how long their images would be around? I wonder if they were pleased with their marks? Did they travel on from the place they left their mark and then think fondly of the art they made and then left? Here’s my hand stencil journal page. I had my daughter and son add their hands and then I made some notes in pen to remember a few things about them. 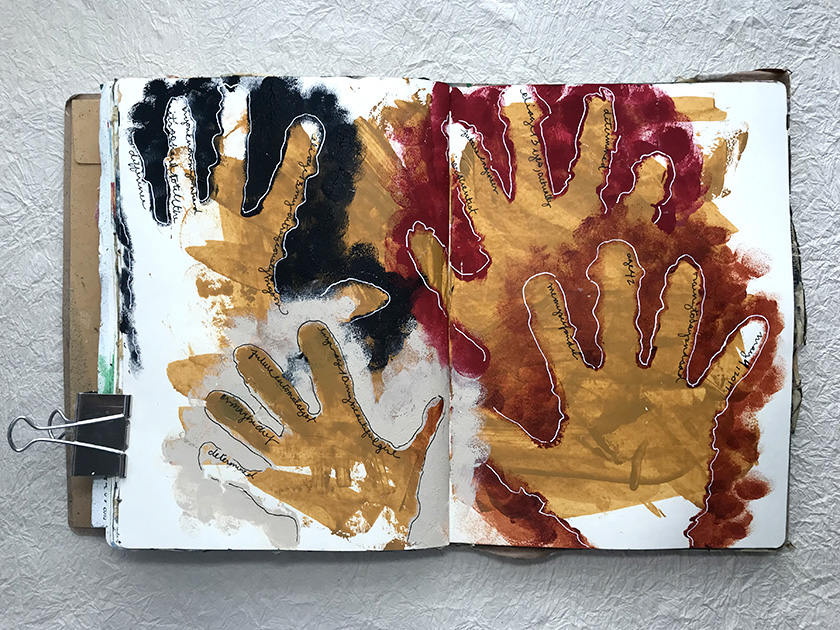 Animals figure prominently in cave painting. No one knows for sure if these images for are cataloging migration patterns to remember them for hunting purposes, celebrating outstanding hunts, if they were just amazed at the animals they encountered, regardless of the reasons, animals are everywhere in cave art. I found an image I particularly liked from Lascaux Cave and reproduced it by tracing it with a pencil and then using a charcoal pencil to transfer it onto my journal page. 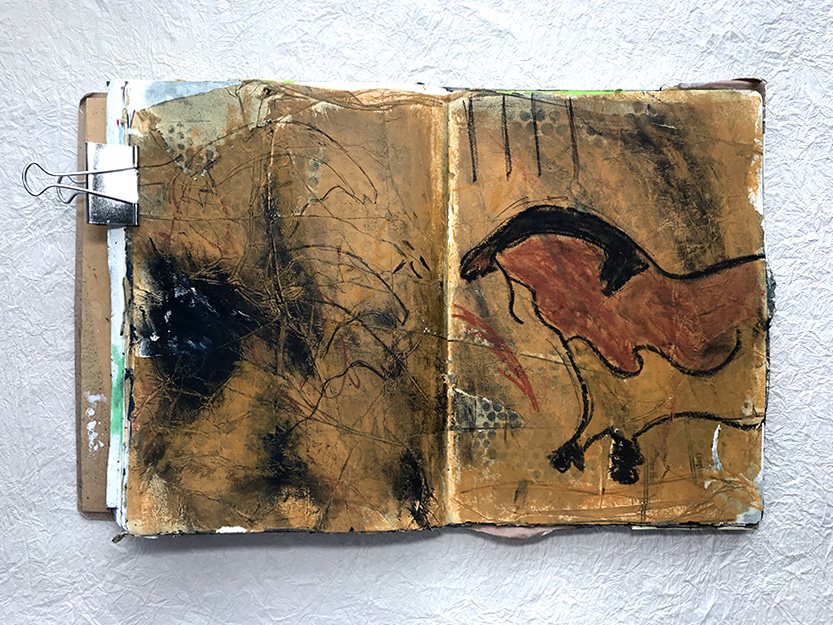 While there are instances of stick figures in cave art, drawings of human figures are few and far between. There’s some debate about why that is. It could be that drawing the human shape was a religious or cultural no-no. If you search for “petroglyph” you will find more human shapes. Petroglyphs are formed by carving the rocks instead of painting on them. I love Divyam’s take on human figures. 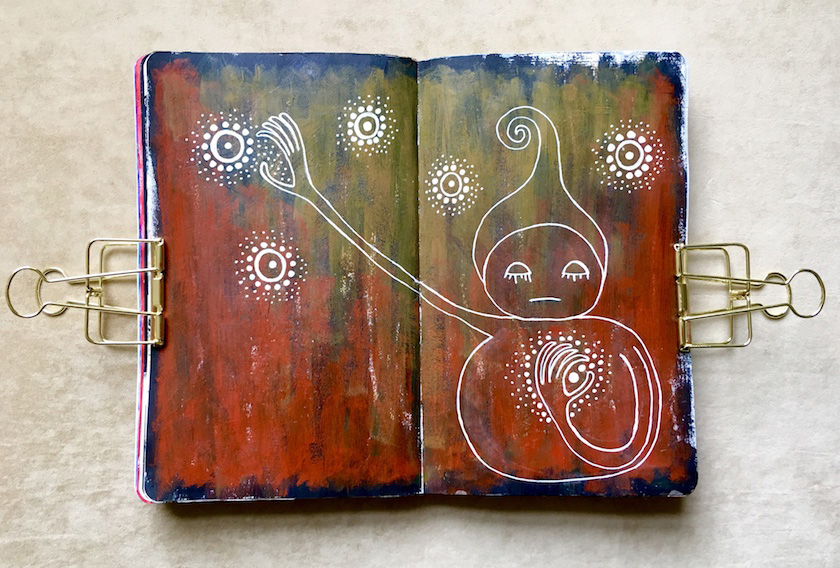 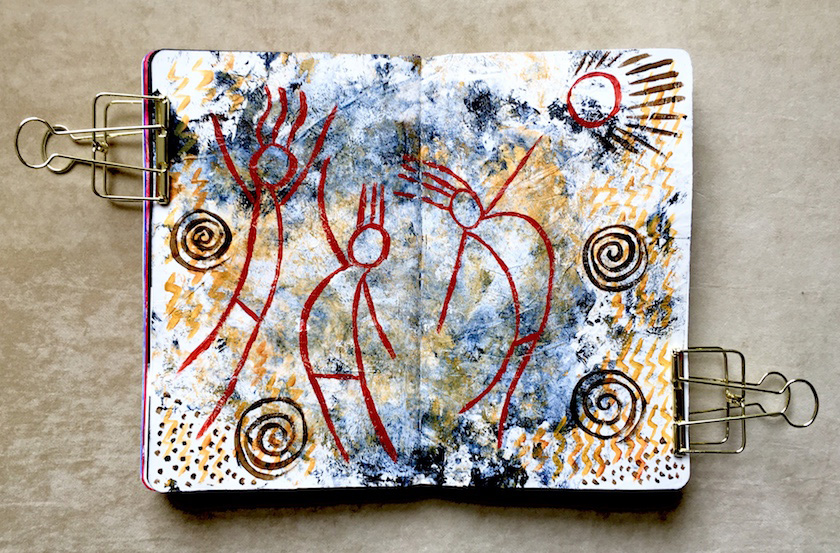 A few notes about my cave painting pages

This article/video report is a fascinating look at cave signs used as communication and the research behind studying them. Here’s another article about the symbols used in cave painting. It has a great chart of the recurring symbols in cave paintings. 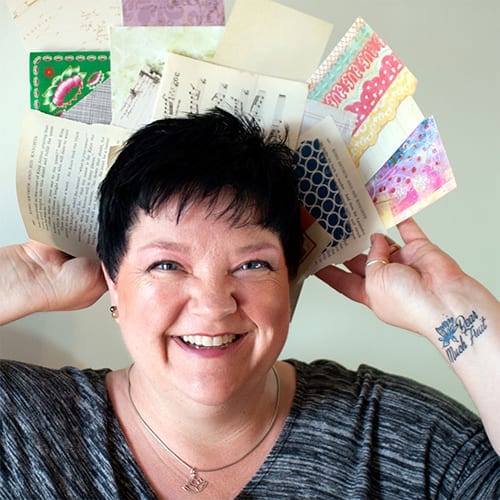 Misty is ever-so-slightly obsessed with paint, glue, and paper. Her interests range across a variety of arts and crafts such as contemporary visual art, mixed media, book binding, crochet, and yarn spinning. When she isn’t in her studio slinging paint or gluing things together, she is busy with her family and serving as President of the Board of Directors for Global Women.