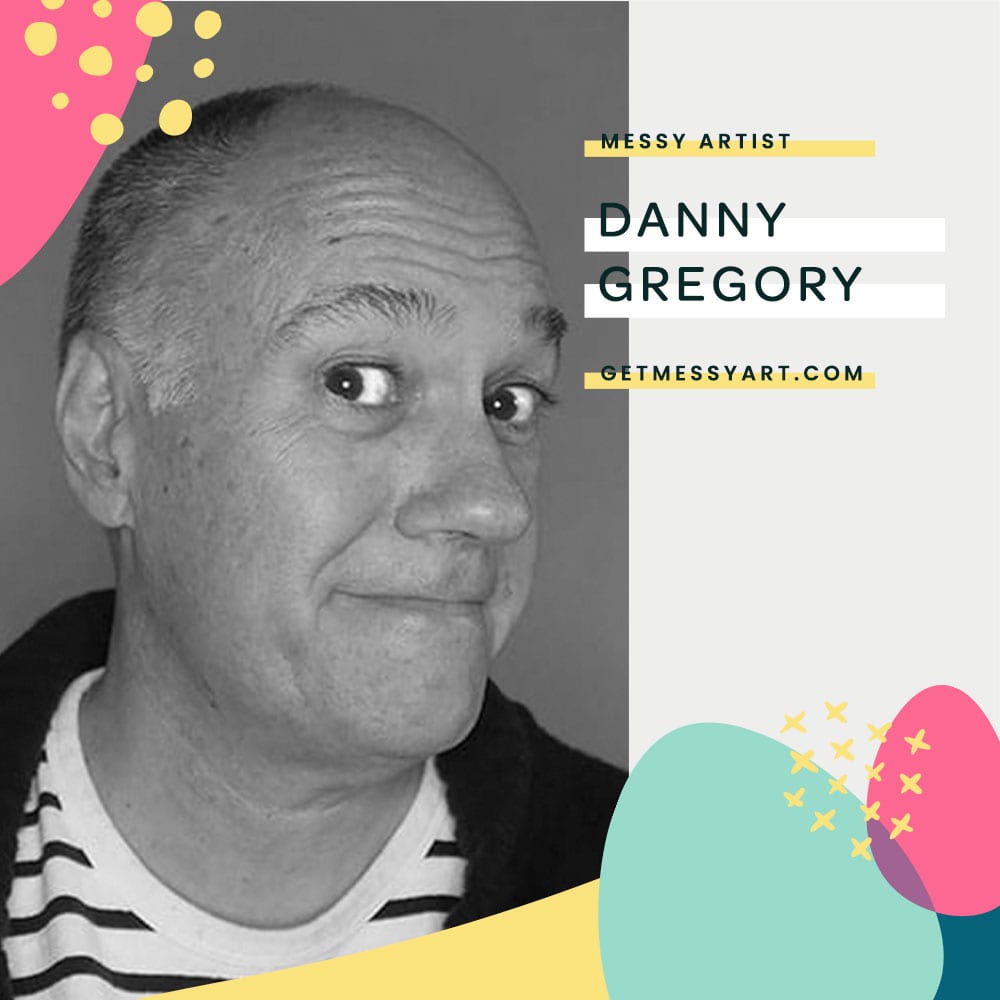 Sketchbook Skool was founded by Danny Gregory (New York) and Koosje Koene (Amsterdam). Danny Gregory taught himself to draw in his mid-thirties, after a tragic accident changed his life. Drawing brought him peace and joy and a new perspective on life. As a kid in Holland, Koosje Koene drew all the time… and she never stopped. She went to school to study graphic design, then worked for ten years as an award-winning professional photographer. But eventually her love of drawing and painting took over, and she became an illustrator and began blogging and teaching drawing online.

WHY DO YOU LOVE CREATING?

Creativity is problem solving. Sometimes it’s my problem. Sometimes it’s a problem I’m paid to tackle. Sometimes the problem is just a twitching in my brain that needs a scratch. I love making something out of nothing or out of several unrelated things and the satisfaction that comes from seeing the pieces fall into place. I’m addicted.

WHAT TIPS DO YOU HAVE FOR BEGINNERS?

Just start. Keep revving your cold engine no matter how much it protests and inch your way onto the road. Battling inertia is hard. The first inch is the hardest. It will keep getting easier from here on in. Accept that what you make will almost certainly suck — at first— and that’s the way it’s meant to be. If it’s easy and perfect from the get-go, you’ve set the bar too low. Give yourself props for starting; that’s the hardest part and you’ve done it. Break the process down into small do-able parts and tackle them one by one.

WHAT DO YOU DO WHEN YOU DON’T KNOW WHAT TO MAKE?

I look at what others do and try to find something to steal. I start with a minor variation on their theme and pretty quickly it becomes mine. It’s like getting a push from a mentor.

HOW DO YOU FILL YOUR INSPIRATION WELL?

I read a lot. Usually 2-3 books a week. I follow about 25 people on Instagram, no more. I watch docs about people who do things really well, artists, craftsmen, adventurers. I walk.

HOW DO YOU FIND TIME TO MAKE THINGS?

I start early in the morning. That’s the best time to lay eggs. I don’t follow sports. I accept that I will make a lot of crap so there’s no reason to spend a huge amount of time dithering rather than just getting down to it. I acknowledge that making stuff is the reason I’m here. What could be more important.

HOW DO YOU GO FROM BEGINNER TO EXPERT?

Time. Perseverance.  That’s a boring answer but it’s the only one. Keep making stuff, don’t judge it too harshly, make more stuff.

WHAT ARE YOUR MUST HAVE SUPPLIES?

A long shower.  A brief nap. A pleasant walk. A black pen. A blank sketchbook.

In How to Start Art Journaling, we’ll walk you through the art of art journaling, including how to start doing (🙌) and make your very first art journal page (even if you’ve never even opened an art journal before).

WHAT IS YOUR CREATIVE STORY?

When I was small, I loved to draw, to perform, to make up stories.  But the time I graduated from high school, most of those impulses has been squashed. I majored in Politics and eventually found my way to advertising.  For a few decades I made commercials for banks, tech companies, and oil companies.  When I was in my mid thirties, my son was born and nine months later, my wife was run over by a NYC subway train. She was left paralyzed and spend the rest of her life in a wheelchair.  A different life but eventually a happy and rewarding one — for her. My sense of what life was about success, happiness, the fairness of the universe, were all thrown into chaos. I spent a dark year or two looking for answers until one day, for no apparent reason, I thought to make a drawing of the contents of my bathroom cabinet.  That experience began to change everything. I discovered that drawing was a way of being present, of getting out of my head, of seeing the beauty all around me. I started to record our lives in a long series of sketchbooks. Making an illustrated journal was a revelation. Combining words and pictures made me aware in concrete and emotional ways of the real dimensions of my life. I lived more fully and much of my fear and anxiety began to calm. I began to blog about my experiences and discoveries and then a publisher asked me to share this story in a book called Everyday Matters.  Since then I have written a dozen or so books about different aspects of creativity, given a lot of talks, workshops, quit advertising, and partnered with Koosje to build Sketchbook Skool.

AND HOW DID YOU START SKETCHBOOK SKOOL?

I had taught a few workshops for fifty or so people. It was rewarding but I was wondering how I could capture what I was teaching and share it online. I also wanted to use my 30 years of commercial production experience in a new way. I met Koosje when I was speaking at a conference  in Amsterdam.  She was teaching illustration  online and I was eager to earn more about her experiences. After my trip, we continued to talk via email and included a few of my other friends in the discussion. The six of us created our first kourse, Beginning, and launched it in the winter of 2014. We had to close enrollment when we hit 2,000. Clearly there was interest in our idea. So we continued to recruit more artists, make more kourses, and expand our staff. Twenty kourses and 50,000 students later, here we are!

DESCRIBE YOUR CREATIVE PROCESS. DO YOU HAVE RITUALS TO MAKING?

I like to work in small increments. Maybe it’s due to my years making 30 second commercials and print ads, rather than movie some novels. I like to build things brick by brick. Every book I have written began as a series of small ideas collecting in my journal or on my phone, jotted down while I walked or lay in bed.  I collect big heaps of these bits, not editing or refining, until I have to.  Then I sift through the piles and start to organize my thoughts. Many are overlapping and I shape them into larger coherent chunks. Even the ideas that seemed like crap eventually reveal their place in the puzzle.  Some ideas are bricks, some are mortar. Some are just crap.  I am guided mainly by instinct. As I assemble the pieces, the structure emerges. It’s often a surprise to me.  I think one of the scariest things for beginners is the size of the mountain they want to summit, the seeming impossibility of writing a book or building a company.  They spend a lot of time worrying rather than making.  My approach is to just write down one thought, then another, and have faith that they will all link up in time.  This may not work for most people but it does for me.

HOW DOES AN IDEA BECOME AN ART PIECE OR PRODUCT?

I think I just explained that (?)

WHAT IS YOUR BIGGEST STRUGGLE OR BARRIER TO CREATING AND HOW DO YOU OVERCOME IT?

Me. The voice in my head that says I suck. It tells me my ideas are bad, my skills wanting, my standards mediocre. I wrote a book about that voice (Shut Your Monkey) but I still haven’t managed to silence it completely. The most effective way I’ve found to bypass the voice is to just start making stuff until it is buried under a pile of creation.  I keep kicking judgement further down the road until I am confident enough to evaluate it productively. That works pretty well.

WHAT ARE YOU CURRENTLY WORKING ON?

In late 2016, I decided to take a little time off from writing books and focus entirely on Sketchbook Skool. We made a bunch of great kourses last year and have eight new ones in the works for 2018.  Ideas I might have put into book form are finding their way into videos instead, some my own, some made in collaboration with other artists. I also write for our zine which is another outlet for my ideas on creativity. And we are working on our first conference, SketchKon 18, which is a huge but absorbing project. I have also been working on a bunch of personal projects. I just completed over 100 dog paintings, one a day. I have made a few dozen videos called Sketchbook Club in which I explore and discuss artists whose work has inspired me. I am making a film in 12 short episodes called My Life in Pens. I have been blogging fairly regularly since 2003 (dannygregorysblog.com). Oh, and I am about to launch a podcast with my mother about our family history (which is rather strange —  the history, not podcasting with my mum.  Well, actually that’s a bit strange too). And I still draw, though these days increasingly on my iPad. 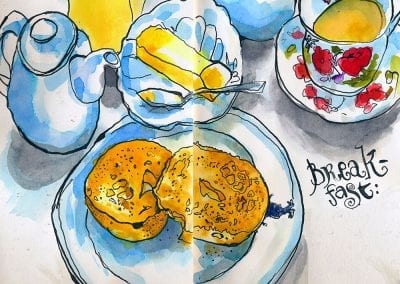 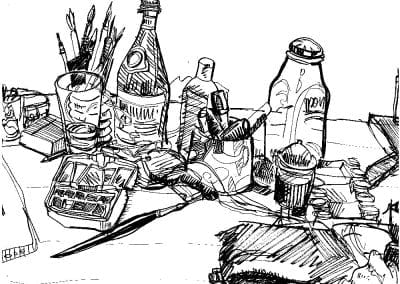 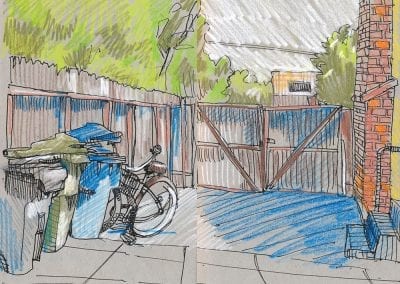 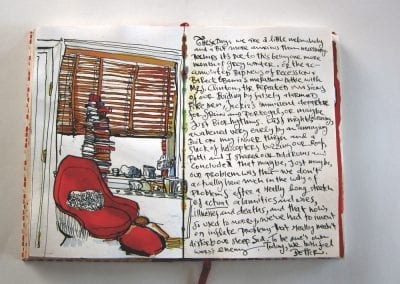 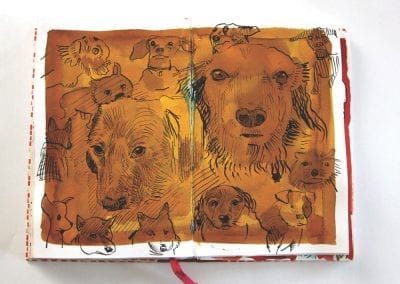 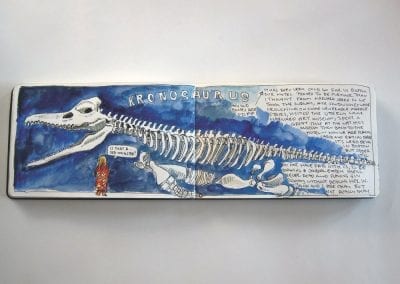 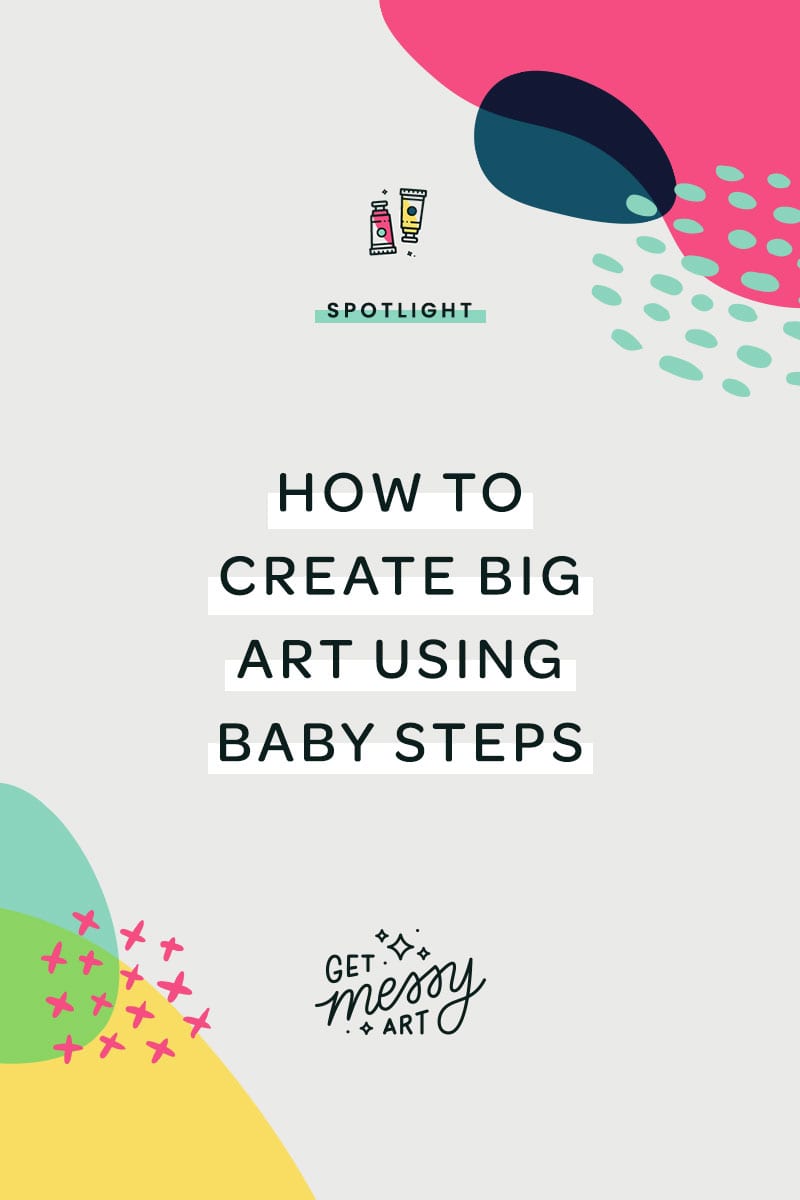 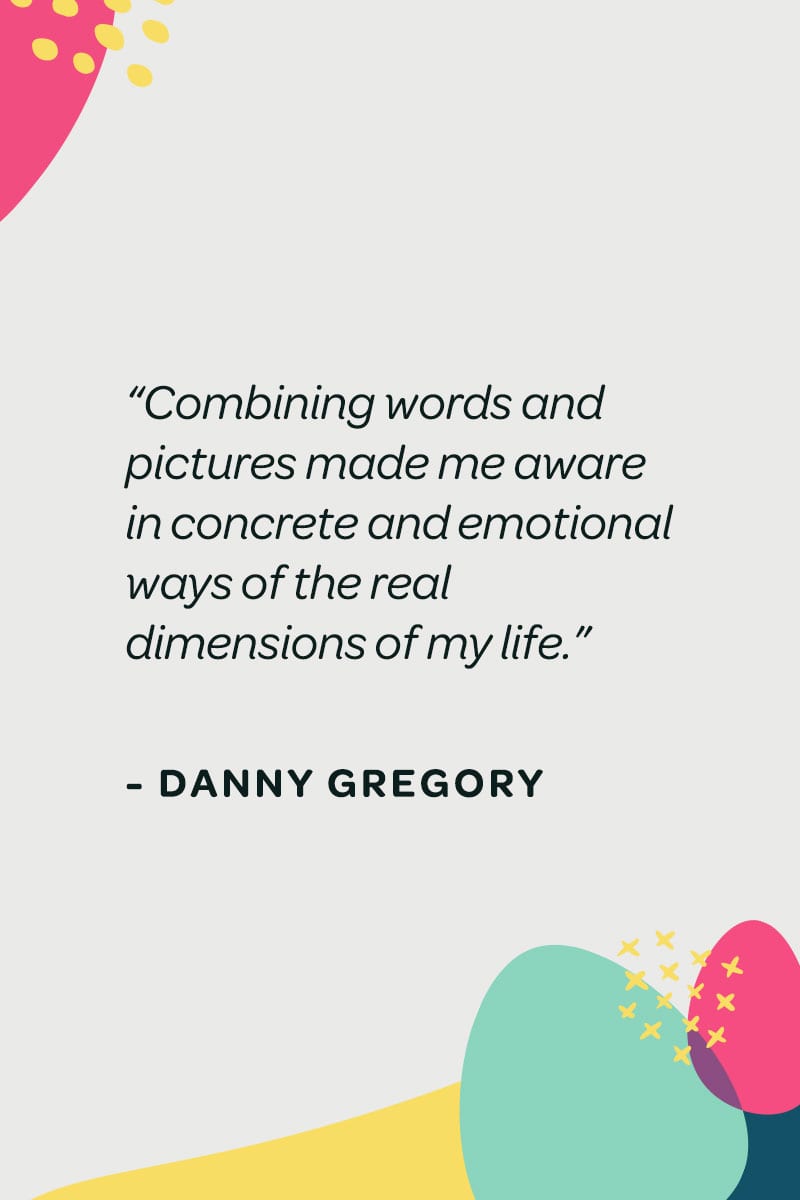 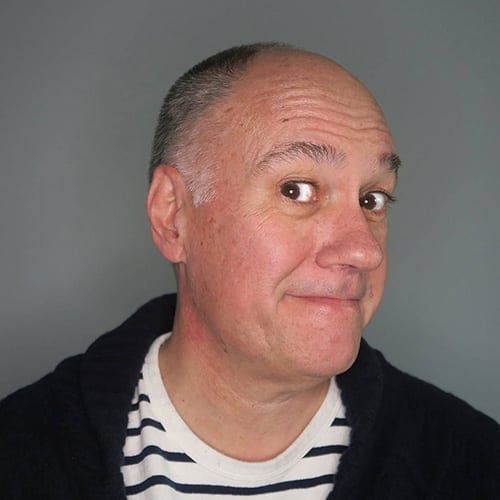 Sketchbook Skool was founded by Danny Gregory (New York) and Koosje Koene (Amsterdam). Danny Gregory taught himself to draw in his mid-thirties, after a tragic accident changed his life. Drawing brought him peace and joy and a new perspective on life. As a kid in Holland, Koosje Koene drew all the time… and she never stopped. She went to school to study graphic design, then worked for ten years as an award-winning professional photographer. But eventually her love of drawing and painting took over, and she became an illustrator and began blogging and teaching drawing online.

Implement your own baby steps with art journaling